A report on the first year of operation for the Healthy Incentives Program (HIP) has been published, laying out patterns of initial use, and identifying issues to address for the long-term health of the program.

The largest number of HIP points of sale were located in Middlesex and Worcester counties, two of the largest counties in Massachusetts, with 53 and 41 points of sale respectively. Suffolk County had the highest number and value of HIP purchases, as expected since it is the largest metropolitan area in the state. The report further overlaid points of sale with SNAP household populations, showing where access could be improved in parts of the state like northern Worcester County, southern Berkshire county, and the Hilltowns. Unfortunately, the map lacks finer detail in the Suffolk county region, where differences in transportation options make issues of access more complex compared with suburban and rural areas. 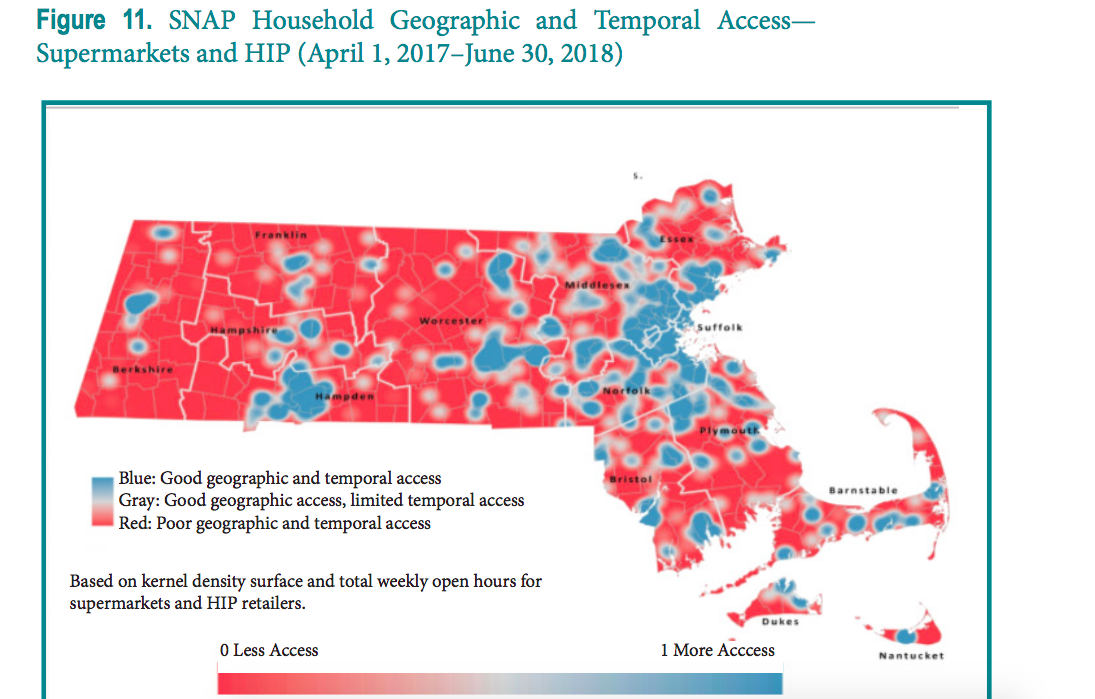 HIP redemptions were higher in areas that were previously identified as food deserts —  33% vs 25% in all other areas — illustrating unmet demand for healthy foods in these areas. However, only half of census tracts identified as lacking in healthy food access had that issue mitigated by HIP, further suggesting that more intentional planning is needed in establishing new farmers’ markets and other points of sale to address equity in healthy food access.

The report found that 22% of HIP incentives, were redeemed at HIP retailers, meaning HIP shoppers are spending their earned incentive dollars at the same farm retailers they earn HIP at, further increasing farmers’ sales. HIP shoppers earning their entire monthly incentive increased from 25% in May 2017 to 61% in April 2018, which indicates that shoppers recognize the value in the program and need the entire benefit.

Some challenges identified included lack of trust in government programs, lines and increased foot traffic at markets, language barriers, and balancing administrative burdens with desire to best serve customers. These data confirm anecdotal evidence that suggests more training and outreach to make farmers markets a truly welcoming environment to all shoppers is needed.

HIP has grown tremendously since its first year, but the findings of this report give important insights into the success of the program and the need for continued support and advocacy to ensure it receives the investment and improvements it needs in order to fulfil its mission.